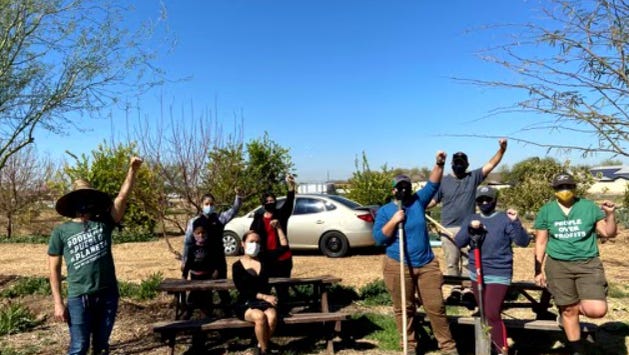 Playing in a public park and marching in a political rally may seem like two completely unrelated activities.

But for Chispa Arizona, an environmental justice organization that advocates for the state’s Latino communities, the two are thoroughly intertwined.

Since its founding in 2014, Chispa Arizona set an ambitious agenda: advocating for clean and renewable energy at state and local levels, campaigning for funding for public land and working to expand voting rights. The group played an instrumental role in the record Latino voter turnout in Arizona in the 2020 elections.

Although Chispa has had successes, such as helping to elect one of the first Latinas to a statewide office — Anna Tovar, who serves on the Arizona Corporation Commission — it also has met resistance and disinterest from the very community members who could benefit from its initiatives.

Many working-class Latinos didn’t care or know about environmental issues because they were busy trying to make ends meet, lacked knowledge of political issues or simply felt their voices didn’t matter, Chispa Arizona found. And participation in activities such as hiking, camping and going to parks is not as widespread in the Latino community as it is in some others.

“The outdoors and camping spaces are usually thought of as not accessible for many Latinos and other minorities,” said Vianey Olivarría, co-director of Chispa Arizona. “So I think this conversation is something that we have always been focused on: How can we bring people back into the parks, where they feel safe and where they feel like they belong.

“So Chispa Arizona’s whole mission, other than making people understand that they have a voice, is to also let them understand that they belong in local parks and public spaces. These are places for us as well and we should have access to them. We should be able to be there safely and feel confident and happy to be there without being conscious of our identity.”

Creating ‘entry points’ to the outdoors

To help bridge this gap, the group came up with a simple idea: Get community members outside. Help them see the beauty and the benefits of well-maintained open spaces and a clean environment. Then they can begin to understand how environmental issues affect them.

Chispa created what it calls “entry points,” free outdoor activities a few times each month to encourage the Latino community and other groups to get outside and learn how climate justice affects them.

The idea arose from a 2019 trip to the Grand Canyon with 30 Chispa members. The trip was done in partnership with the Sierra Club, whose goals align with Chispa’s. Like most people on the trip, Olivarría, a 15-year resident of Arizona, had never been to the Grand Canyon.

“It just really shifted my whole being because that’s what happens when you go out in nature,” Olivarría said. “It’s good and beneficial for you and your mental and emotional health. And I know it was the same for the 30-plus people who were there and who brought the kids, who brought their grandmothers and their aunts. It was beautiful.”

In 2020, when Chispa wanted to do another large-scale trip to a national park, the pandemic halted their efforts. So they decided to stay more local.

“That’s why now we are starting in local spots with these entry points,” Olivarría said. “We have a base here in Maricopa (County) and so we decided to do what we can locally where people can join us and get outdoors.”

Chispa’s events are not solely for enjoying the outdoors. The organization also tries to give its members skills that they can take home. For example, it offers hands-on gardening classes that promote food sustainability.

“A lot of our community members, specifically Latinos, are a little scared, they don’t have representation, they don’t know how to validate the environment itself,” said Julian Zepeda, a Chispa community organizer.

“So, we are hoping through our campaigns like community gardening or our other entry points, that they can connect the work that we do and hopefully they gain the knowledge and learn they have a powerful story that politicians need to hear to create the change we are fighting for.”

Eva Medina,  a 22-year resident of west Phoenix, had never been to Rio Salado Habitat Restoration Area just south of downtown Phoenix until she joined a Chispa event there on March 7.

Medina, a mom who works as a caregiver for older adults three days a week, was eager to break up her pandemic routine and had an appetite to help her community.

“I think we all need to work together in order to get better areas,” Medina said. “And that’s why I got involved with Chispa, just hoping that they can help us get something to our neighborhoods.”

At the clean-up, Medina was joined by her husband and son along with 10 other volunteers. The group spent an hour picking up garbage while wearing masks and remaining socially distant. Afterward, the volunteers learned from park rangers about Rio Salado, its plants and animals and the conservation efforts throughout the habitat.

Medina said she originally hesitated to get involved in Chispa events because she wasn’t comfortable with the political part of the group’s mission.

“I’m not a very political person, which I probably should be,” said Medina, who is from Chihuahua, Mexico. “But, you know, from my background or from where I come from, it’s very difficult to believe in politics, because to me, it’s just words that very rarely come true.

Medina has since joined several Chispa cleanup events and the experiences have helped her see the bigger environmental picture facing her community.

“The nicest park we have (in Phoenix) is Encanto Park, which is in a very nice neighborhood,” she said. “I think we need more green areas and more clean areas because the area where I live in (west Phoenix) is in pretty bad shape.”

Medina laments that their financial situation prevents some members of the Latino community from appreciating the outdoors and having verdant parks to take their children.

“It’s because the money that we make is not even comparable to what some white people make. So that has a lot to do with it because more moms and dads have to work overtime in order to provide, to make it throughout the week. So there’s less time to get involved in family activities, to educate yourself, to read a book.”

Medina also said that change in the community must start from within.

“One of the things I think is needed is education in the first place,” she said. “We don’t necessarily know or appreciate what’s around us. People don’t know that we can ask for better things in our neighborhoods. We pay taxes and I think it isn’t fair.

“Where I live, there is mostly Latinos and African-Americans and some (Native Americans). I don’t even know how to put it. We don’t recognize or value ourselves that much. If we don’t care about ourselves, we won’t care about our neighborhood or other people.”

‘We need to be a role model’

Chispa’s events are not solely for the Latino community. The organization strives to build a network of people from all walks of life who care about the environment and understand the importance of outdoor spaces.

It also wants members and others to grasp the idea of “environmental racism,” whereby people of color are adversely affected by pollution simply because of where they live.

Low-income and Latino neighborhoods endure more extreme heat in the Southwest, researchers from the University of California, Davis, and the American University of Beirut reported this year.

And air pollution in metro Phoenix tends to settle over lower-income neighborhoods, research shows. According to 2017 data from the Maricopa County Department of Public Health, south and west Phoenix zip codes have some of the highest rates of asthma in the county.

“Chispa Arizona builds Latinx political power,” Olivarria said. “Our main group is people who identify as Latinx, mothers to college and high school students. It’s a very intergenerational network. Most of them and our members live in west and south Phoenix. And it’s mostly people who have been impacted by environmental racism.

That mission is fully supported by the once hesitant Medina, who now regularly volunteers with Chispa and its Rio Salado cleanup efforts. Medina hopes her efforts inspire others to care about the environment in their own neighborhoods and beyond. When enough people catch on, she believes, it will surely get the attention of politicians.

“We need to set an example to have more people and authorities or important people to notice this movement. We need to be a role model,” she said.

Anyone is welcome to join Chispa and learn about its climate justice mission for Arizona’s Latino communities. The monthly “entry points” are open to the public and a schedule can be found at facebook.com/ChispaAZ.