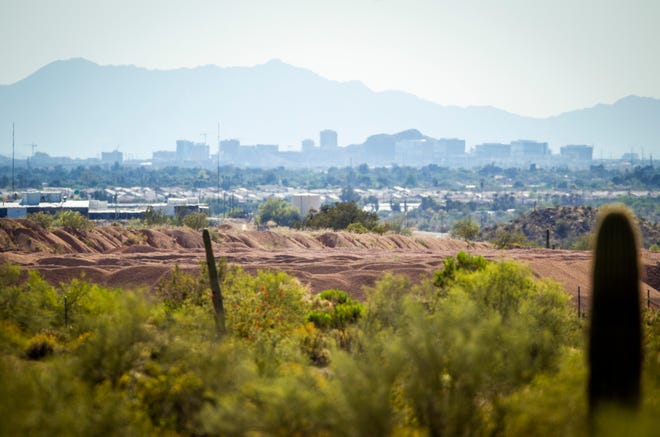 On any hot day in the Phoenix area, the heat builds up in some neighborhoods more than others.

In leafy neighborhoods with trees and shade, the air stays cooler and more bearable. But in exposed areas where the sun beats down on pavement and concrete, the heat soars.

Research has shown these differences in many areas fall along lines of race, ethnicity and income, reflecting the nation’s history of discrimination in housing and decades of disinvestment in poorer neighborhoods.

Now researchers have looked closely at 20 urban areas across the Southwest and have found that the poorest 10% of neighborhoods are much hotter — 4 degrees F on average — than the wealthiest neighborhoods in the same areas.

The study, by researchers from the University of California, Davis, and the American University of Beirut, found that these heat inequities exist throughout the Southwest, from Albuquerque, New Mexico, to Fresno, California.

They saw the largest disparities in southern California, with differences between low-income and high-income areas on hot days of 6-7 degrees in the Palm Springs area, the Inland Empire and Los Angeles.

The research shows areas with large Latino populations bear an unequal burden as the planet heats up with climate change, with temperatures higher on average than predominantly white areas.

“Heat disproportionately impacts those who have the least amount of resources to mitigate it,” said Jake Dialesandro, a doctoral student in geography at UC Davis and the study’s lead author. “Low-income populations, unfortunately, consistently throughout the southwestern United States — whether you’re Phoenix, whether you’re Tucson, Las Vegas, any of the California metropolitan areas — you’re subject to much greater heat, not only during average heat times, but also during extreme heat events.”

Dialesandro said he and his colleagues hope their findings will help cities and communities focus on high-priority areas that need help combating heat, whether through immediate efforts like opening more cooling centers or through initiatives like planting trees, erecting shade structures, developing parks or rethinking the design of buildings.

While researchers, local officials and community leaders consider ways of helping reduce the burden of heat for the most vulnerable people, the toll from heat-related illnesses and deaths continues to grow.

The number of deaths linked to heat rose to a new high in Arizona in 2020 as people endured the hottest summer on record and the complications of the pandemic.

The deaths of at least 510 people were heat-related last year, state health officials said. That included at least 315 heat-associated deaths in Maricopa County, according to the county public health department. Of those deaths, 155 were people experiencing homelessness.

With other cases still under investigation, the death toll could still rise. Hospitalizations for heat-related illnesses have also been increasing in Arizona over the past decade.

“Latino populations are disproportionately impacted by this urban heat,” Dialesandro said. He and his colleagues found that to be true in Phoenix, Tucson and other cities. In California, they found the biggest disparities.

In the Phoenix and Tucson areas, the study similarly showed temperatures between 3 and 5 degrees warmer on average in neighborhoods with large Latino and low-income populations as compared to wealthy areas with predominantly white populations, Dialesandro said.

Using the data, they mapped the hotter and cooler sections of each urban area. Around Phoenix, hotter zones stretched from south and west Phoenix to Glendale and the northwest valley. Relatively cooler areas included wealthier suburbs around Scottsdale and Chandler.

The research also showed stark contrasts in California’s Coachella Valley, Dialesandro said, where the wealthy tend to live in lush enclaves — in many areas with golf courses or shady yards with swimming pools — and poorer people, many of them Mexican-American, live in neighborhoods with less vegetation.

In general, the wealthier, cooler areas have more trees and greener landscapes, and that’s readily apparent in the satellite images, Dialesandro said. Without even looking at the temperatures, he said, you can look at an image and predict “where the warmer temperatures are, and unfortunately where lower-income populations also are.”

In places, these hotter neighborhoods are interspersed with acres of parking lots and treeless industrial complexes.

The study, which was published in the International Journal of Environmental Research and Public Health, adds to other research showing heat disparities in cities across the country.

In a study last year, other researchers focused on the legacy of federal housing policies that segregated neighborhoods through “redlining” and blocked Black families and other people of color from buying homes in predominantly white suburbs. The research analyzed 108 urban areas across the United States and found that in 94% of those areas, there were consistent patterns of warmer temperatures in neighborhoods where redlining had occurred.

In the Phoenix area, it’s long been clear that many Latino neighborhoods don’t have nearly enough trees and shade, and that they’ve received less resources for parks, said Laura Dent, executive director of Chispa Arizona, a program of the League of Conservation Voters.

“It’s obviously a huge problem. It’s something that Phoenix is going to have to grapple with and the entire state of Arizona is going to have to grapple with — really, intentionally — as these communities are developing climate action plans,” Dent said. “That investment around making sure that communities are protected needs to start in the areas that have seen active disinvestment for many, many years.”

Dent hopes to see focused efforts to “cool our communities as fast as we can.”

Ideas for mitigating heat in the hottest areas have been part of the discussions as city officials update Phoenix’s climate action plan. Beyond that, Dent said, “really decision makers at every level can be applying this lens to their thinking,” considering the disparities while working on solutions.

The 315 heat-related deaths in Maricopa County set a new record for a fifth straight year in 2020, far surpassing the 197 heat-linked deaths reported in 2019.

County health officials said various factors may have contributed to the rise in deaths, including the record-setting heat, closures of air-conditioned indoors spaces like libraries and malls and possibly more people living on the streets due to the disruptions caused by the pandemic.

Efforts are underway to boost the number of centers where people can escape the heat this summer. Experts and local officials have been talking about solutions regularly through the Arizona Heat Preparedness and Resilience Workgroup.

Community leaders in some of Phoenix’s hottest neighborhoods have also worked with Arizona State University researchers to develop local plans for addressing heat, which include various approaches, from planting more trees in neighborhoods to establishing shaded walking paths for schoolchildren or around public transit stops.

The latest study from UC Davis adds to previous findings and confirms much of what heat researchers already know about the situation in the Phoenix area, said Melissa Guardaro, an assistant research professor who works with ASU’s Healthy Urban Environments Initiative.

Addressing these disparities, she said, is a matter of environmental justice. She and others describe it as “thermal justice” or thermal equity.

One partial solution is curbing greenhouse gas emissions to fight climate change, Guardaro said. At the local level, a variety of solutions can be adopted to counteract the urban “heat-island” effect, in which exposed asphalt, concrete and roofs soak up heat from the sun and push temperatures higher.

As it stands now, some neighborhoods in the area can be as much as 10 to 13 degrees hotter than others in the summer, Guardaro said. Cooling these areas can be accomplished by changing how neighborhoods are designed and built, she said, and by incorporating parks that help cool the surrounding air.

Rethinking cityscapes could in some cases be as simple as flipping the footprint of two planned buildings to provide more shade for the street and sidewalks.

Guardaro said she loved a term that the researchers used in their new study: “smoothing the thermal inequity.”

“That was just such a great concept because truly we have an unequal situation here,” Guardaro said.

And not all possible solutions revolve around landscape improvements like planting trees, establishing parks or switching to cooler reflective pavements and rooftops. Guardaro said it’s also important to raise awareness about the threats heat poses, so that people will change their behavior, even doing something as simple as using an umbrella outside to block the scorching sun.

As for the heat-related deaths, Guardaro and other researchers say they’re completely preventable.

“We as a society need to do a much better job of protecting our more vulnerable groups,” Guardaro said. That includes increasing the number of open cooling centers this year, she said, and equipping the centers so that people can get information about better coping with heat.

With the economic upheaval caused by the pandemic, another concern centers on low-income residents’ ability to pay rent and electric bills.

The Arizona Corporation Commission last year put in place a moratorium on power shutoffs for unpaid power bills, and it’s unclear how regulators will address the issue when they revisit these rules.

The federal government’s moratorium on evictions is set to expire at the end of March, and Guardaro said she fears that could leave many renters vulnerable if they’re forced out of their homes.

“We should really examine whether or not the timing is right to lift the moratoriums, both for utility disconnection and for the evictions, given the dangerousness of perhaps being unhoused during the summer months,” she said.

Dialesandro said state and local governments should mitigate the heat disparities by reducing paved surfaces, increasing the amount of drought-tolerant vegetation and encouraging building techniques that increase shade. He said the findings of the study can help focus local efforts on areas where people suffer from the most intense heat and have the fewest resources to deal with it.

“We really need to look at prioritizing the neighborhoods that have the greatest exposure,” Dialesandro said.

In a previous project, Dialesandro participated in recommending areas of Tempe to prioritize for increasing shade. He coauthored the latest study with colleagues Noli Brazil, Stephen Wheeler and Yaser Abunnasr.

“Heat doesn’t get enough attention, and in my opinion, that’s because it’s only a nuisance to a lot of people,” Dialesandro said.

That’s partly because widespread air-conditioning has made the Valley of the Sun livable for millions in the summer months.

Many people can simply turn up the air-conditioning without worrying about paying extra on their electric bills, Dialesandro said, but others with limited means may face choices between paying for adequate air conditioning or other needs like paying rent and buying food.

“If you have to decide between rent and running the air conditioner, you’re going to decide on paying your rent,” he said. “And that’s terrible.”

Without efforts to address these inequities, Dialesandro said, they’re only going to get worse — especially in the coming years, as climate change pushes heat waves to scorching new extremes.